Do you want to change pricing plan? Proceed Here

EUR THE FUTURISTIC SIDE OF THE CITY OF ROME

The EUR conquers and fascinates for the monumental and elegant Cubist architectures, which are lined with marble and travertine, interact with newly-built buildings, are made of steel and glass to dare a new and contemporary image in EUR.

The EUR has a double soul: of the Cubisum that reflects the ideals of perfection, order and rationality trend in the twenties; and with a strong ancient Roman Heritage revival with it’s neoclassic recals of mable statues with the Greek perfection and Roman Grandiosity for the propaganda of the Musolini fascist era .

It is a district with a spectacular character that looks like an immense setting, not only for the eye, but also for the cinema that started with Roberto Rossellini with “Roma città aperta” in 1945, passing through Fellini, until arriving at the Oscar winner “La grande bellezza” by Paolo Sorrentino.

Created by the will of Mussolini, with the Fascist regime to celebrate the colonial enterprises and the twentieth anniversary of the Fascist revolution, EUR standing for Esposizione Universale Roma, with a Universal Exposition planned in 1942, but never took place because the begaining of the world war II.

The idea was to create a new Rome, the capital of Italy and to bring back its glorious past, through the architect Marcello Piacentini, the idea Benito Mussulini wanted to express is this regim Fascism takes shape and becomes a solid architecture … it becomes a Whole city. Lets say as the emperors of Rome had their glorious forum so did Mussolini want one. He did this best to revive Italy, by draning swamps, creating a pension system that you can find in this complex as INAIL, he made museums, convention centers and many innovative inniatives and buildings to represent his doings that our guide will illustrate to you in the EUR -NEOCLASSIC-CUBISUM TOUR 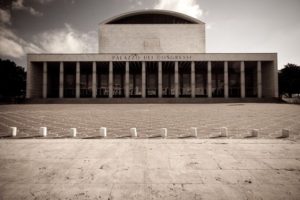