Do you want to change pricing plan? Proceed Here

Spring  Spree in Rome: Flora The Roman Goddess of Spring

What is the symbol that more fully expresses all the femininity?

Certainly the flower. Roses, tulips, sunflowers, lilies … the list is long but each of us loves definitely receive them.

But the flowers are also the symbol of Spring.

In mythology, the flowers are usually associated with the wonderful figures of the goddesses. Cornflower belongs to Isis,  Violet to Aphrodite and verbena with Venus.

In Roman times the flowers of the gods were used for the practice of special rituals and were offered to the most important personalities of  that times. Mythology believed that the fowers of gods were born from the blood of the gods fallen to the ground. These flowers were once carried in procession and then burned on Vesta’s fire when they became dry. The ceremonial persisted until the Middle Ages.

The Roman goddess of flowers and spring is called Flora and represents the awakening of life. She presided over the spring awakening and, more broadly, to all that must blossom: flowers, youth, hopes and sense of love. 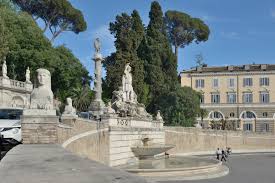 During a spring day, while the girl from the icy and ethereal beauty was walking in the fields, was immediately noticed by Zephyr who immediately was enchanted and fell madly in love with her. He kidnapped her and married her. As a demonstration of love he allowed her to reign over the flowers in the gardens and fields.

The Latin writer Marco Marrone said that the goddess Flora had been introduced in Rome by King Titus Tatius, who had built a chapel in Capitol hill.

Flora, for the Romans, was the personification of the new forces of nature and was often called affectively mater flora. As maternal deity had the task of protecting, with many other Roman gods, wheats in bloom. She became so over time the protector of all that blossom, that is open and waiting to bear fruit and whose future must be protected.

In all picturesque depictions come down to us, Flora was depicted as a young woman with a flower wreath that adorned her head, wrapped in a long tunic and a mantle full of flowers which dispensed all around.

She has always been a very well loved and venerated goddess by the ancient Romans that have bestowed many honors, including a temple on the Palatine and the specific ludi, the Florealia which took effect from April 28 to May 3. The Ludi Floreales were fun, wild and orgiastic ceremonies with a pastoral theme full of great jokes and drinking, in which  it was afforded greater lasciviousness.

Come to Rome and admire the wonderful statue of Flora overlooking one of the prettiest squares in Rome, Piazza del Popolo. And what better opportunity this season.

Today Spring season is officially starting and we are sure that Goddess Flora will definitely put his paw in the breathtaking blooms that color the whole Eternal City.

What are you waiting for? Reserve your Roman Dream Tour now and enjoy this beautiful season in Rome, the city par excellence where this season give special colors and emotions to everybody.

For more info write to info@romaluxury.com